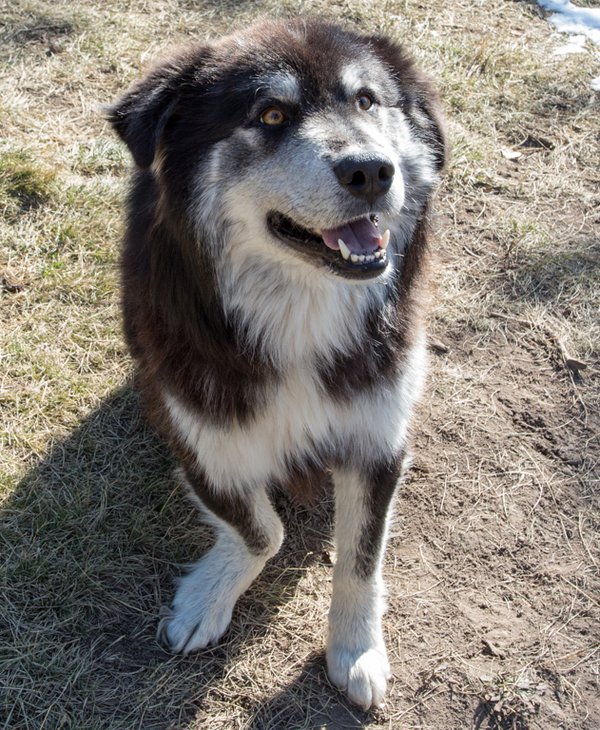 Odin was rescued during a blizzard out in Kananaskis and ended up at the Bow Valley SPCA. He was cold, underweight, but yet oh-so-happy!

As soon as Odin arrived we noticed that something was very obviously wrong with his right front leg. His forearm and paw were bowed quite far right, leaving him with a wobbly gate and a right leg that was 7 cm shorter than his left!

After some x-rays we were able to conclude that the radius and ulna were twisted and bowed. The small bones in his wrist were unaligned and most likely causing him quite a bit of discomfort every time his foot hit the ground.

The vets predicted that he most likely had a break or fracture in his radius early on in life, and without a home or anyone to look out for him it went untreated. Odin is the happiest guy around now, but he probably had a pretty painful and tough go for a while, as his leg healed.

After a few consults we were able to steer away from amputation and found a surgeon who came up with a plan to save his leg! After going through a few different ideas the final plan was set. She would cut a section out of his forearm bones in order to straighten them and then remove those small wrist bones and replace them with a metal plate that would take away all the pain he was experiencing.

Odin is going to have a big surgery and a recovery full of rehab and rest! The surgery is estimated to be $3500 and the recovery (rehab, xrays, medications etc) will add on at least another $1000.

We are a no kill, no cage shelter, and therefore we provide our animals with the medical care they need if it means saving a life or giving them a more fulfilling one with less problems down the line! We rely entirely on donors, fundraising and grants to allow us to continue to do what we do.