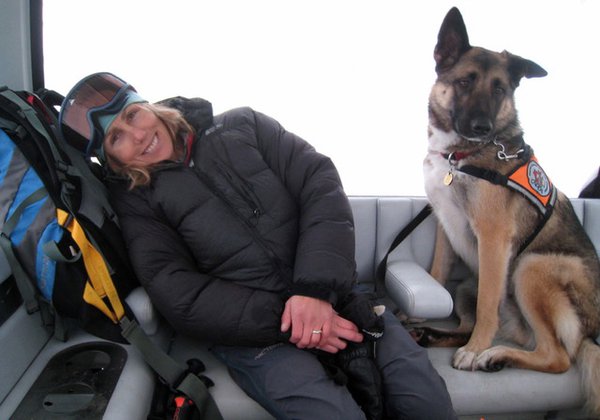 In 2007, a park ranger discovered a shepherd-type dog wandering near the highway in Kananaskis Country. He was lame, matted, and extremely skinny but responded immediately when the ranger called, albeit slowly because of his limp.

The ranger brought him to Bow Valley SPCA

It turned out that Blake was about one year old, had probably been wandering for about a month with no food, and had a severely broken hip joint. He was most likely struck by a car after being abandoned in the park.

Our veterinarian presented two options to the board of directors. He could amputate Blake's leg for about $200 or we could spend $5,000 to have his hip repaired by a specialist.

As it turns out, we made a very wise investment. Blake went on to become a certified avalanche rescue dog. He even served at the Para-Olympics in British Columbia.

Now retired, Blake and his person come to the Bow Valley SPCA on a regular basis to work with the dogs who need a calm canine friend.

Blake has taught us what is means to "Pay it forward”.

Now retired Blake lives with his person Niki and husband Paul. They are a much valued team volunteering with Bow Valley SPCA, helping fearful dogs to socialize and find their forever home.